After over a year in Las Vegas, Derek Carr is a Las Vegas Local. He’s seen around the city doing life, charity events, and even with his family at the VGK playoff games. Derek and the entire Raiders team are adding to Las Vegas in a big way. We find it great that his house is on the hill overlooking Allegiant Stadium.

With a 5-10 minute commute to work every day, the Carr family is able to spend more time together. Having the best stadium and team headquarters on the planet must help his psyche. Now he can focus on having the best team on the planet to complete his life trifecta!

Winning hearts and minds in all three cities- Oakland, Los Angeles, and now Las Vegas has to be a great feeling too. Winning gives hope and attention to the Las Vegas community which was hit pretty hard in 2020. The entire Raiders organization is making a difference in their new community.

Derek Carr has always had his heart in football. In 2009, Derek enrolled as an early-entry freshman in the spring semester at Fresno State University. He did this so he could participate in the spring football program with the Bulldogs.

After two years of impressing the coaches, Derek took over the starting quarterback position for Fresno State in the fall of 2011. Fast-forward 3 years and the Oakland Raiders selected Derek in the second round of the 2014 NFL Draft. Derek Carr was the 36th overall pick. Now, a Raiders game is incomplete without him at the helm.

Derek is happily married to Heather Neel. Just like every romance, the couple’s love story had to start somewhere. Theirs started with a pickup line about Heather’s earrings. Ultimately, the guy won the girl. The couple met while they both attended Fresno State where Heather was a working student and Derek played football.

Heather happened to be a cheerleader in Fresno High so they shared the love of football. They had a rocky period where Derek partied a bit too much in college but they made it out on the other side. Heather was a spiritual person who devoted her life to working and being a good Christian. Derek and Heather were probably a match made in heaven – Heather sent Derek a letter that changed everything. Derek gave up the party scene and they were married not too long after that.

The Carr’s Giving Back

Mr. and Mrs. Derek Carr have three sons and an adorable baby daughter. He says she’s his #1 fan. Life has also had its challenges off the field for the Carr family.

When Dallas, their eldest was born, he was diagnosed with Intestinal Malrotation. Seeing your child suffer has to be one of the hardest things to experience as a parent. Surgery was able to correct Dallas’ condition and as a result, Derek and Heather give back to their community. Derek has been seen visiting the kids in the hospital this year too. Those kids must love having Derek on their team!

Their experiences encouraged Derek and Heather to become actively involved in philanthropy. They participate quite often in charity events that teammates support. They give physically, emotionally, and financially to many causes. 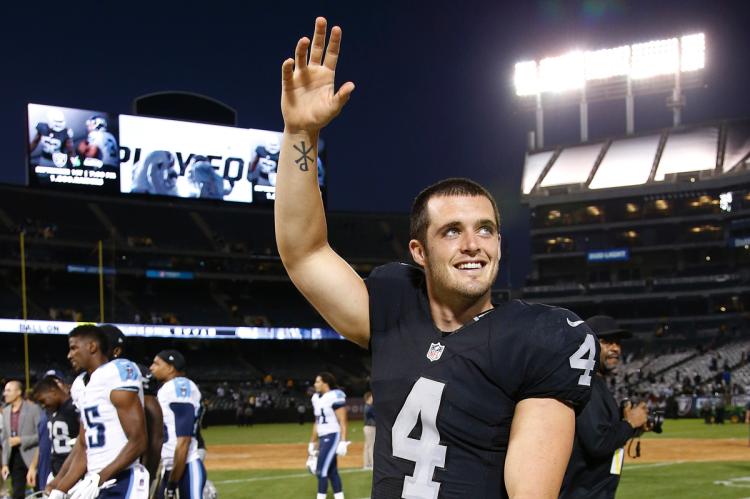 Derek’s right hand tattoo is a Chi Rho. It’s a monogram of chi (Χ) and rho (Ρ) as the first two letters of Greek Khristos Christ, used as a Christian symbol. It reminds us of the crucifixion of Christ. That’s a good balance of bad boy and devout Christian. The party boy is still there, he’s just covered with faith.

Visit Derek Carr’s social media pages below. We’ve attatched their social media platforms so you can view them all in one place- here at RaiderLadies.com. Bookmark us and come on back.