Andre James is a twenty-four-year-old who has been known for redshirting for the UCLA Bruins. In his five years in college, Andre played as an offensive right tackle. He declared for the NFL Draft in 2018 and became a free agent for the Raiders in 2019 after signing a two-year contract worth more than 8 million dollars.

With a renewed contract comes more challenge and excitement for Andre. After spending his college career as a tackle, Andre personally expected that he would still be a tackle for the Raiders. But to his surprise, he had to change positions from being a tackle to playing the center.

More than the fact that Andre had never played center before, he had big cleats to fill. Pressure to replace such a good player as center for Raiders makes his entry into the NFL very eventful. In 2021, the Raiders traded All-Pro Center Rodney Hudson to the Arizona Cardinals. This left Andre as the de facto center just three days after the trade happened.

The change in such an important position was a big thing for both Andre and the team. Analytics predicted that he would “do well” playing center. He started off rough but things are looking pretty much better these days.

While preparing to play center for the Raiders, Andre spent a lot of time with Derek Carr. The two developed chemistry while spending two seasons together in Oakland and then 2020 in Las Vegas. The team dubbed them as the Raiders’ dynamic duo.

Fans noted their friendship after learning that the two spend time together doing something other than practicing reps together. Their favorite thing to do? Eating grilled American Wagyu Tomahawk steaks and smoked 16-pound brisket. Aside from football, Andre says he loves to eat! Sounds good to us!

Andre lost his father, Marcus James, to testicular cancer in October 2018. He was left with his mother, Angela, and two younger siblings. Even with the sad loss, Andre mustered the strength to play football 5 days after his father’s passing. And with pride and honor for his late father, Andre brought home the victory of that game against Arizona.

Andre loves not only eating but also grilling meat. In his IG story highlight entitled Traeger, you will find a compilation of him just grilling and having a wonderful time off from the field. Another story highlight, Great Eats, features him having great food and fun with team Raiders.

Go check his Instagram Highlights now and have a full load of satisfying moments recorded by our new Raider, Andre James!

Andre has a Raider Lady! 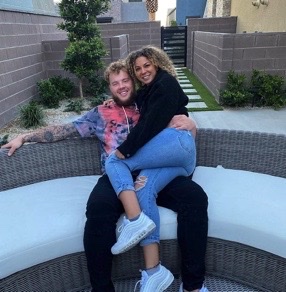 Find Andre’s gorgeous Raider Lady on Instagram! Lovely photos of Andre and his girlfriend, Mikaela Thomas, are posted in each other’s Instagram accounts.

And if your goal is to achieve that healthy and sexy bod, you’ll surely fall in love with her and her feed too! She got some great exercise and fun adventures to inspire you. Go check her Instagram and shower her with some Raider Ladies love!